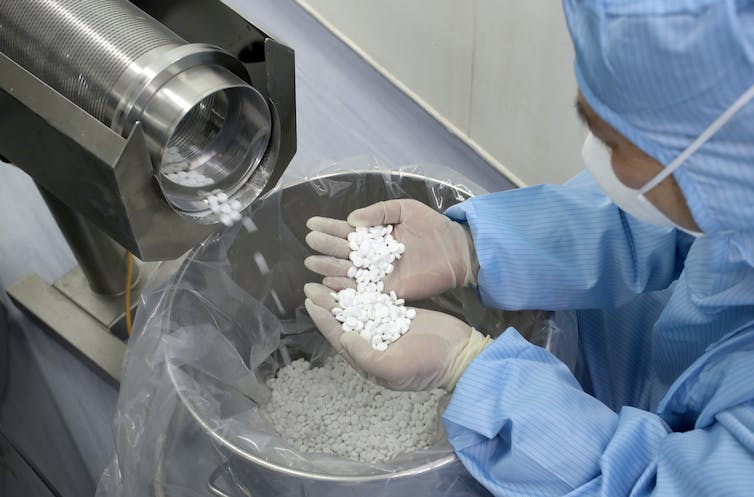 An employee in Nantong, China, checks the production of chloroquine phosphate, an old drug for the treatment of malaria. Feature China/Barcroft Media via Getty Images Katherine Seley-Radtke, University of Maryland, Baltimore County

An Arizona man died, and his wife was hospitalized, after taking a form of chloroquine, which President Trump has touted as an effective treatment for COVID-19. The couple decided to self-medicate with chloroquine phosphate, which they had on hand to kill parasites in their fish, after hearing the president describe the drug as a “game changer.”

Dr. Anthony Fauci, head of NIH’s National Institute for Allergies and Infectious Diseases, quickly corrected the statement, explaining that Trump’s comments were based on anecdotes and not a controlled clinical trial. 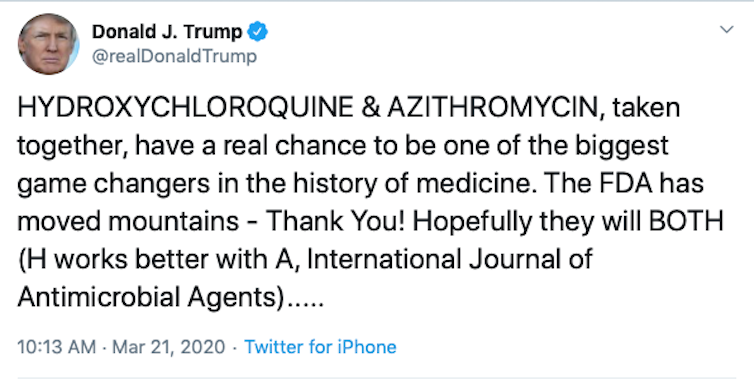 I am a medicinal chemist who specializes in discovery and development of antiviral drugs, and I have been actively working on coronaviruses for seven years.

However, because I am a scientist and I deal in facts and evidence-based medicine, I am concerned about the sweeping statements the president has been making regarding the use of chloroquine or the closely related hydroxychloroquine, both antimalarial drugs, as cures for COVID-19. So let’s examine the facts.

These are both FDA-approved antimalarial drugs that have been in use for many years. Chloroquine was originally developed in 1934 at the pharmaceutical company Bayer and used in World War II to prevent malaria.

Although the FDA has not approved its use for these conditions, both chloroquine and hydroxychloroquine are also used to treat rheumatoid arthritis and lupus.

After the initial outbreak of MERS in 2012, scientists conducted random screens of thousands of approved drugs to identify one that might block MERS infection. Several drugs, including chloroquine, showed the ability to block coronaviruses from infecting cells in vitro. But these drugs were not extensively pursued because ultimately they did not show enough activity to be considered further.

When the new coronavirus appeared, many drugs that had shown some initial promise against the related coronaviruses MERS and SARS were at the top of the list as worthy of further evaluation as possible treatments.

So the science is real, and a number of labs around the world are now investigating these drugs and testing them in clinical trials in the U.S., France and China. But so far, there is no consensus about whether the drugs are safe and effective for treating COVID-19, as it is still very early in the testing process.

Why would antimalarial drugs work on a virus?

It is still unclear how the chloroquines (or any antimalarial drug) would work against COVID-19, which is a virus. Malaria is caused by Plasmodium parasites that are spread by mosquitoes, whereas COVID-19 is caused by the SARS-CoV-2 virus.

Viral infections and parasitic infections are very different, and so scientists wouldn’t expect what works for one to work for the other. It has been suggested that the chloroquines can change the acidity at the surface of the cell, thereby preventing the virus from infecting it.

Do other drugs show promise?

To my knowledge, no other antimalarial drugs have shown any meaningful activity against treating coronaviruses. However, another potential drug has risen to the forefront. Remdesivir, developed by Gilead Pharmaceuticals, seems to be highly effective at preventing viruses – including coronaviruses such as SARS and MERS, and filoviruses such as Ebola – from replicating.

In late February the National Institute for Allergy and Infectious Diseases launched a clinical trial for Remdesivir. And this month Gilead launched two phase III trials of the drug in medical centers in Asia.

Should I start taking them to ward off coronavirus?

Absolutely not. Chloroquine and hydroxychloroquine have not been appropriately evaluated in controlled studies, not to mention that they have numerous and, in some cases, very deadly side effects.

No one should take a drug that has not been proven to be safe and effective for a disease or condition for which it is not approved. There are just so many issues that can arise, from side effects to serious toxicity and death due to possible interactions with other medications and other underlying health conditions.

So until these or any drugs have been shown to be effective against SARS-CoV-2 in clinical trials and have been approved by the FDA, no one should be self-medicating.

[You need to understand the coronavirus pandemic, and we can help. Read our newsletter.]

Katherine Seley-Radtke, Professor of Chemistry and Biochemistry and President-Elect of the International Society for Antiviral Research, University of Maryland, Baltimore County

This article is republished from The Conversation under a Creative Commons license. Read the original article.

Welcome to the discussion.

Keep it Clean. Please avoid obscene, vulgar, lewd, racist or sexually-oriented language.
PLEASE TURN OFF YOUR CAPS LOCK.
Don't Threaten. Threats of harming another person will not be tolerated.
Be Truthful. Don't knowingly lie about anyone or anything.
Be Nice. No racism, sexism or any sort of -ism that is degrading to another person.
Be Proactive. Use the 'Report' link on each comment to let us know of abusive posts.
Share with Us. We'd love to hear eyewitness accounts, the history behind an article.